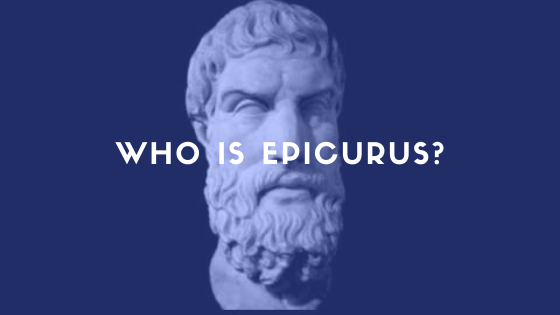 “Do not spoil what you have by desiring what you have not; remember that what you now have was once among the things you only hoped for.” – Epicurus

Epicurus (341-270 BCE) was born in Samos a year after Plato’s death, but moved to Athens when he was eighteen (one year before Aristotle died). In 321 BCE, he moved to Colophon (in modern day Turkey), as his parents had been exiled there with other Athenians after the death of Alexander the Great. He returned to Athens in 307, where he died in 2070. It was in Athens that he founded a school named the “Garden.”

Despite being over two thousand years old, Epicurus’ ideas often seem very modern. His firm commitment to naturalistic explanations for everything separated him from other philosophers of his day who were happy to reference the Gods or ethereal “forms” to imbue the world around them with meaning and purpose. From the wide array of life forms on the planet to the development of social structures and justice, Epicurus sought to find explanations that did not rely on creationism or some kind of moral purpose guiding humanity. In doing so, he arrived at ideas akin to evolution, was a veritable atheist, and believed that morality existed as a part of a natural social evolution. Oddly enough, we hear about Aristotle and Plato all the time, but only think about Epicurus when eating rich foods.

This is partly because Epicurean philosophy is best known for its theory of value, or the “good life,” which is effectively that the good life is a pleasurable life. For Epicurus, all human action comes from the pursuit of pleasure or avoidance of pain. In cases where this seems untrue, it is simply because what humans derive pleasure from is not necessarily easy to identify and differs greatly amongst people. Pleasure is a function of meeting our desires, or the lack of desires all together (a state of tranquility or ataraxia), which is the highest pleasure of all. This latter point is what differentiates epicureanism from hedonism.

For Epicurus, there are different types of desires, with different qualities of pleasures associated with their fulfillment. There are natural necessary desires, like the desire for water, food, etc., which cannot be eliminated, but can be fulfilled with relative ease. There are natural non-necessary desires, such as rich foods, comfortable beds, beautiful art. The desire for these luxuries should be avoided, according to Epicurus, because it can always grow greater, outstripping our means. This would leave unfulfilled desire, which causes pain. The third is vain desires, which are socially driven desires like fame, power, and money. These desires cannot ever be completely fulfilled, one can always be more powerful, richer, more famous, so we should destroy these desires.  The key here is Epicurus’ emphasis on unmet desires as the source of pain, and his belief that fulfilling certain desires (non-necessary and vain) simply leads to those desires increasing. This leads his desire based system of value to the unexpected conclusion that the good life is an extremely simple life of meeting basic needs and seeking tranquility.

Absent from Epicurus’ ethics is the idea of a “universal good” or “ultimate purpose” for humanity. This is in part due to his theory of the universe as being composed of atoms and space. In his view, there was no ethereal, non-physical substance that could make up a soul or disembodied mind. The human mind, rather, resides in the chest and is made up of atoms, and when we die, those atoms break apart. The mind is a physical substance, and Epicurus denied that physical and non-physical substances can interact (meaning, some Platonic form of value cannot be accessed by our minds). The mind, therefore, has only the information it gains from sensory experience to provide it with an value system, so our pleasure and pain are all we have to base our values off of.

One result of this is that justice, rather than being some kind of universal system with necessary rules, amounts to humans abiding to mutually agreeable contracts (i.e. I won’t kill you if you won’t kill me). This is one of the first expressions of contractarianism as a theory of justice in Western philosophy. Epicurus maintained that a social ethical system would maintain in the absence of universal values enforced by deities, because it is less fear and anxiety inducing (painful) to live in a society where mutual trust and safety are ensured. Although Epicurus stated that there were gods (possibly to avoid getting in big shit for being an athiest), he claimed that as non-physical beings, they had no impact on our lives and frankly didn’t care about humans, because if they did then why was there so much suffering and evil on earth? From the gods, we can only learn one thing— a complete disinterest in human affairs and politics, which often produce more pain than pleasure and destabilize one’s tranquility.

Epicurus died in Athens at the age of seventy in 270 BCE. After his death, Epicureanism grew to be one of the major philosophical schools of its time, alongside Stoicism.

Is the Gain worth the Pain?

Consider several pleasures you enjoy in life. These things may involve certain foods, desserts, or habits like playing video games or engaging social media. Create two columns on a sheet of paper and, considering each of these pleasures, list the benefits in one column and the costs or pains that result from pursuing these pleasures in the other column. Apply Epicurus’ principle of ataraxia, or tranquility. Does this pleasure add more tranquility to your life, or does it cause you more pain than it’s worth?

How much is “too much” of anything? Consider things you want and need in your life—i.e. food, money, recreation, recognition, work. All of these things come at a cost. Can you identify, at what point, the pursuit of these things comes at a greater cost than is necessary? Further, does accumulating too much of any good thing cause you discontentment? In other words, at what point does accumulating more of any good thing actually cause you more suffering than it is worth? Consider the last five things you remember purchasing. Would your life be significantly better or worse if you had not purchased these things?

We live in a particularly contentious political time. Epicurus, however, argued that most of what happens in politics has very little impact on one’s personal tranquility. Caring too much about political matters, he believed, was likely to cause one more pain than the issue at stake. Are there any issues being disputed in society today you are passionate about? Consider to what degree such policies or positions actually impact your daily life. What benefit do you, personally, experience by being politically active or inactive? Do you agree with Epicurus’ view that avoiding politics is wise? Why or why not? At the very least, does examining politics from an Epicurean perspective impact the way you might engage others who disagree with you politically? How much political engagement is “prudent,” applying Epicurus’ principles?

“That which is blessed and immortal has no troubles itself, nor does it cause any to others; so that it is not subject either to anger or to benevolence. For everything of this kind is found only in that which is weak.”

“To these pains [the pains of impending death], I have opposed the joy I feel in my should when I recall our philosophical conversations.”

“In the exercise of wisdom, pleasure goes hand in hand with knowledge; for we do not obtain enjoyment after we learn, but learn and enjoy simultaneously.”