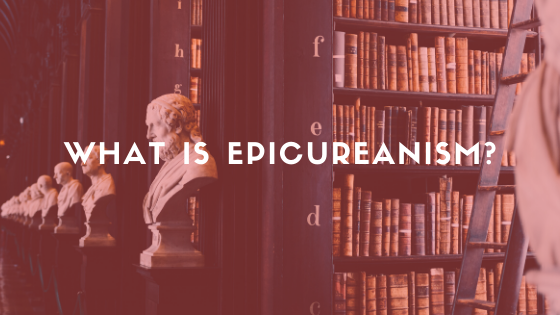 “No pleasure is a bad thing in itself, but the things which produce certain pleasures entail disturbances many times greater than the pleasures themselves.”

Epicureanism is an ancient greek philosophical system founded by Epicurus in the 4th century B.C.E.  After Epicurus’ death, Epicureanism became one of two major schools of thought in the Greek world, alongside Stoicism. Along with the more analytic side of the philosophy dealing with the nature of the universe, matter, and the soul, Epicureanism, like Stoicism, included many practical recommendations as to how to live a good life.

Epicureanism is best known for its theory of value, namely that humans are ultimately driven by the pursuit of pleasure and the avoidance of pain and that a good life is a pleasurable life. In this view, there is no objective value system that exists independently from human experience. For Epicureans, all human action is motivated by pleasure and pain. In cases where this seems untrue, it is simply because what humans find pleasurable or painful is differs greatly amongst people and isn’t always obvious.

Epicureanism differs from hedonism, because it has a specific definition of pleasure. Pleasure is what comes of meeting our desires, or is the lack of desires all together (a state of tranquility or ataraxia), which is the highest pleasure of all. For Epicurus, there are different types of desires, with different qualities of pleasures associated with their fulfillment. There are natural necessary desires, like the desire for water, food, sleep etc., which cannot be eliminated, but can usually be fulfilled with relative ease.

There are natural non-necessary desires, such as rich foods, comfortable beds, beautiful art. According to Epicureanism, pursuing the fulfillment of these desires should be avoided, because as we fulfill them they continue to grow and soon our desire for luxury can become untenable. Epicureanism holds the same to be true of passionate love and sex and marriage is discouraged. If we come to constantly need the best food, or beds, or entertainment, or sex, it leaves a much greater chance that we can’t have those things. In that case we are left with unfulfilled desires, which cause us pain.

The third is vain desires, which are socially driven desires like fame, power, and money. These desires cannot ever be completely fulfilled, one can always be more powerful, richer, more famous, so we should destroy these desires. So, despite the common use of the word Epicurean as relating to the enjoyment of fine food and beverage, Epicurus’ desire based system of value leads to the the unexpected conclusion that the good life is an extremely simple life of meeting basic needs and seeking the tranquility of being free of desires.

Friendship is strongly recommended by Epicurus, who apparently said “Friendship dances around the world bidding us all to awaken to the recognition of happiness.” (Vatican Sayings, 52) Interestingly, Epicurus promotes a type of friendship that involves taking in that friend’s pain and even laying your life down for them, which seems to chafe against the value system he has set out. Epicurus maintains, however, that the benefits of a trusting friendship, and the pain of the lack of it, make the chance that it will cause pain or even death worth it. Epicurus goes a little beyond this though, uncharacteristically claiming friendship is an “immortal good.”

Other than this, however, the idea of any “universal good” or “ultimate purpose” for humanity is absent from Epicureanism. This is in part due to his theory of the universe as being composed of only atoms and space. In his view, there was no ethereal, non-physical substance that could make up a soul or disembodied mind. The human mind, rather, resides in the chest and is made up of atoms, and when we die, those atoms break apart and our mind ceases to exist.  So, even if the Gods, or some Platonic form of perfected morality existed, they would have to be non-physical (immortal and indivisible), and Epicurus maintained that non-physical and physical substances cannot interact. The mind, therefore, has only the information it gains from sensory experience to provide it with an value system, so our pleasure and pain are all we have to base our values off of. But in a world where pleasure and avoiding pain are the only motivators, why does anyone act morally?

In Epicureanism, justice, rather than being some kind of universal system with necessary rules, amounts to humans abiding to mutually agreeable rules  (i.e. I won’t kill you if you won’t kill me). This is one of the first expressions of contractarianism as a theory of justice in Western philosophy (the idea that moral systems can be developed from self-interested parties looking out for their own well-being). Epicurus held that a social ethical system would maintain in the absence of universal values enforced by deities, because it is less fear and anxiety inducing (painful) to live in a society where mutual trust and safety are ensured. In order to maximize pleasure, a person must minimize the fear of reprisal. In addition, a truly pleasurable life would be virtuous, honorable and just, because a truly pleasurable life is one of minimal desires, which leaves one without need to steal, swindle, and lie to get what they want. According to Epicureanism, unjust behaviour is a function of an unpleasurable life, not the means to achieving a pleasurable one.

Although Epicurus stated that there were gods (possibly to avoid getting in big shit for being an atheist), he claimed that as non-physical beings, they had no impact on our lives and frankly didn’t care about humans, because if they did then why was there so much suffering and evil on earth? From the gods, we can only learn one thing— a complete disinterest in human affairs and politics, which often produce more pain than pleasure and destabilize one’s tranquility.

Epicureanism was an response to the problem that has faced philosophy ever since we began to have a more scientific view of the world: when we observe the world and don’t see meaning and morality obviously present in it, what do we do? Epicurus’ answers to this question were far ahead of their time in their aim to establish morality and justice as existing in the absence of objective values and deities, and in their complex portrayals of human psychology. Of the ancient philosophical schools, Epicureanism most closely maps onto the way we view the world today, but this perhaps worked against it during the time when Christianity had a firm grip on what was and wasn’t okay to think. The secular naturalism of Epicureanism was much more difficult to incorporate into Christian thought than the works of Plato and Aristotle, and so, Epicurus’ works went missing and were edged out of the western canon.

Lucretius (99BC-55BC) wrote the poem De Rerum Natura (On The Nature of Things), which is a poem that lays out the ideas of Epicureanism. The poem was lost for many years, but made a large impact on philosophers

Virgil (70BC-19BC) another poet who was greatly influenced by Epicureanism. He attended the Epicurean school of Siro in Naples, and was influenced by the work of Lucretius. His works Aeneid and Georgics both have strong Epicurean influences.

Epicurus’ works were largely destroyed, possibly due to his depictions of the gods as completely removed from human affairs being incongruent with Christian thought. Five important texts remain:

This is a really basic introduction to Epicureanism, just a collection of great quotes from various Epicureans. It’s available for free here: http://www.epicurus.net/en/vatican.html

Here’s another easy to digest collection of quotes. These 40 quotes are from Epicurus and give a broad sense of his ethics: http://www.epicurus.net/en/principal.html

Letters to Menoeceus, Pythocles, and Herodotus

Each of these letters, written by Epicurus, summarize areas of Epicurean philosophy. The Letter to Menoeceus discusses his ethics, the Letter to Pythocles meteorology and atomism, and the Letter to Herodotus his metaphysics.

The writings of Lucretius and Cicero are where the rest of the Epicurean doctrine has been rendered from.

This text by Lucretius was, for a long time, the only access point to Epicurean philosophy. A six book poem, it largely deals with Epicurean metaphysics and atom theory.

Think about the things you desire. Are there desires you have that you could try to get rid of? See if you can get rid of 5 desires and see how it makes you feel to be free of them.

Epicurus’ theory of justice involved making mutually beneficial agreements and sticking to them. What do you think of this theory of justice? Are there laws that you think should exist that wouldn’t necessarily continue in this system?

Epicurus felt that all human action was motivated by the pursuit of pleasure or avoidance of pain. Does this seem true to you? If not, what would a counter-example be?

“No pleasure is a bad thing in itself, but the things which produce certain pleasures entail disturbances many times greater than the pleasures themselves.”

“What cannot be satisfied is not a man’s stomach, as most men think, but rather the false opinion that the stomach requires unlimited filling.”

“Let us completely rid ourselves of our bad habits as if they were evil men who have done us long and grievous harm.”

“The love of money, if unjustly gained, is impious, and, if justly, shameful; for it is inappropriate to be miserly even with justice on one’s side.”

“Some men spend their whole life furnishing for themselves the things proper to life without realizing that at our birth each of us was poured a mortal brew to drink.”