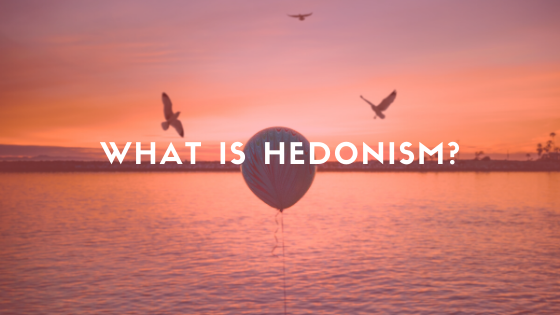 Most modern people, when they hear the words “hedonism,” or “hedonist,” conjure images of self-indulgence, opulent wealth, booze, drugs, sex, the stuff of soap operas or frothy cable dramas. But the philosophical definition of Hedonism refers to a way of practicing life that isn’t necessarily ostentatious, but instead follows the simple credence: maximize pleasure, minimize pain. True hedonism only considers pain and pleasure as intrinsic entities to living.

Hedonism derives its root from the ancient Greek word “hedon,” which translates to “pleasure.” In its most basic form, this philosophy is motivated by the pursuit of pleasure. Pleasure can take many forms. One can experience pleasure through solemnity and tranquility, through elation and excitement, through pleasure of the senses (good tastes, feelings, sounds), and anything in between and beyond (for example, if someone is a sadist, they would experience pleasure by witnessing someone else’s pain). The opposite of pleasure, then, is just as broad. Pain can mean discomfort, boredom, physical pain, emotional wreckage, anything that would personally negatively impact an individual.

It’s easy to see why Hedonism would have a bad reputation, because this philosophy does intrinsically value the individual above all else. This view takes its influence from Egoism, which is the view that one should value one’s own well-being and seek out what is best for one’s self. If one is always working to satiate their self-interests, there’s the possibility that others are suffering because of your self-regard. Another related view, Utilitarianism, aims to reconcile with the more adverse effects of Hedonism. Utilitarians analyze actions through their overall moral impact: how many people will be affected positively by the action. Through this practice, they aim to create the greatest sum of pleasure or good for the most amount of people.

The earliest example of Hedonism came from the Greek school of Cyrenaics (fourth century BC) and was one of the earliest Socratic schools. The Cyrenaics believes that the only valuable and fundamentally good thing in the world was pleasure. This did not just refer to the absence of pain from one’s life, but also to the actual pursuit and seeking of pleasure through active means, especially physical and sensorial pleasure.

Momentary pleasure, for the Cyrenaics, trumped all other forms, whether those be intellectual or psychological, such as memory, because they believed that subjective knowledge was immediate, and that knowledge was amassed through one’s immediate and present experience of a circumstance. Therefore, immediate pleasure constituted the greatest sense of subjective enlightenment. They also acknowledged that there was validity in ethical practices, such as companionship, justice, and acting morally to help others, as those were also ways in which someone could achieve immediate pleasure through action.

The Cyrenaic school was proceeded by Epicureanism, started by the Greek philosopher Epicurus (341-270 BC) , who lived during the Hellenistic period. Epicureanism was a milder form of Hedonism that maintained that a continuous and reasonable pleasure over one’s life through understanding the mechanisms of life and how to avoid pain was the way to achieve an optimum well-being. Epicurus said, “It is impossible to live a pleasant life without living wisely and well and justly. And it is impossible to live wisely and well and justly without living a pleasant life.”

Hedonism was often seen as an unpopular philosophy. This was due to widespread religions like Christianity and its various sects, which stressed the necessity of sacrifice, obstinance, and moral over pleasure-seeking decision-making to live a fulfilled life. However, in the 18th and nineteenth century there was a renewed, if short-lived, interest in the philosophy during which Jeremy Bentham and his successor John Stuart Mill vouched for Hedonistic Utilitarianism. Bentham said, “It is the greatest good to the greatest number of people which is the measure of right and wrong.”

Bentham, Mill, and Epicurus are all examples of Psychological Hedonism.

So, to be or not to be a Hedonist? To maximize pleasure and minimize pain seems to be, in some way, what we are each trying to achieve in our unique way. But let’s go a little deeper and consider some of these arguments and approaches:

1) Being a good person can bring you pleasure

If you are already a person who experiences happiness, excitement, contentment, when you’re volunteering, helping others, being a good friend and family member, you might consider being a utilitarian hedonist. You might in fact see it as intrinsic to your process to help as many people to help yourself achieve the highest level of pleasure. However, this is probably being optimistic about yourself.

If you are striving your entire life to avoid pains like depression, anguish, frustration, or even boredom, you might not be willing to face it ever (and that is pretty unavoidable). Some people who practice experiential avoidance even end up having severe mental health problems due to not accepting their minds’s current state of being. This, like not accepting if you have a cold and not treating it, will only make the symptoms worse.

There’s also the possibility that if you don’t allow yourself to feel harmful emotions, you won’t be able to feel the full value of pleasant sensations. If you never allow yourself to be hungry because it’s uncomfortable, will food ever taste as good as it can? If you don’t exercise because it makes your body hurt, will you ever experience an amazing runner’s high? Sometimes it’s easier to accept, even indulge, in a negative feeling so the positivity that comes after feels all the more potent and important.

A popular argument against Hedonism details the scenario of a “brain in a vat,” or an “experience machine.” Let’s say that your consciousness could be put in a device that allowed you to experience only pleasure all the time. You’d just sit there, feeling good sensation after good sensation for the rest of eternity. Would you do it? If so, you might be a Hedonist. If this example’s utopian premise feels disconcerting, you might be considering these popular hesitations with Hedonism:

Like any philosophy, there will always be avid fans and die-hard dissenters. But consider this as well: there are some people out there who have lived difficult lives and have experienced more pain than we can even fathom. For them, it can be as simple as this quote from Phillip Lopate: “Hedonism can be a rational response to a difficult life.”