Who Is Lao Tzu? 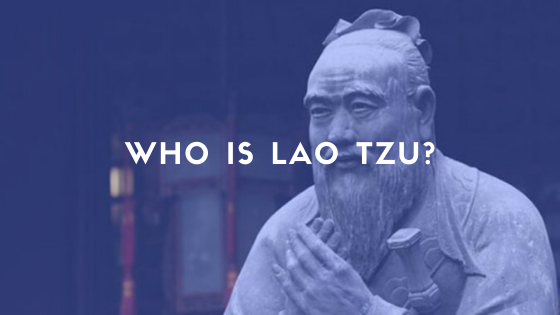 Lao Tzu or Laozi (“Old Master”) was either a person, or a collective of people, in the  4th or 6th century BC who is (are) thought to have written the Tao Te Ching (Daodejing, “The Way and Its Power”), one of the foundational text of the Taosit (Daoist) religion. In the Zhuangzi, another foundational text of Taoism, Lao Tzu is also referred to as Lao Dan (“Old Dan”) and portrayed as a contemporary of Confucius. Lao Tzu has also been claimed to be an Emperor of the Tang Dynasty. What is clear from reading the text attributed to Lao Tzu is that Lao Tzu lived in a time of social unrest. The Tao Te Ching’s vision for humanity is one of complete reformation and abandoning of social and political structures to return to a “natural” state. Radical ideas like this do not stem from times of stability and social welfare, but are usually reactions to chaos and extreme circumstances (which certainly defined the 4 century BC in China, which was the beginning of the “Warring States Period”).

Considering the fact that there is a 200 year spread during which this figure or possibly group of people was alive, firm biographical details are hard to nail down, which is fitting, because Lao Tzu opens the Tao Te Ching with:

“The Tao that can be told is not the enduring Tao. A name that may be named is not an enduring name.”

Enigmatic author, enigmatic subject matter. Essentially what is meant here is that while the Tao Te Ching is an attempt to explain the Tao, which is the order that governs the universe and existence as a whole, it is necessarily bound by words, and words are crude tools for the job. The reader is warned to not take the words at their face value, but to allow them instead to help guide in the search for “The Way.”

The Tao Te Ching is made up of eighty-one short chapters, a mixture of poetry and prose aimed at giving a sense of what the organizing principles of the universe are and how human beings should react to them. According to Lao Tzu, in order to begin to act as the Tao would have us act, we need to radically shift our way of experiencing the world. Some of the ways of achieving this laid out by Lao Tzu are the following:

We must abandon our beliefs that come from words. Language limits the scope of understanding of our experiences. In order to achieve wisdom, we must experience life as it is without filtering it through our preconceived ideas and concepts. Along with this comes abandoning all of our value judgments. We superimpose ideas of good or bad, right or wrong, enjoyable or detestable onto the universe, but these are not characteristics of the things we see them in. In order to see the world as it is and to act truly spontaneously, we must stop projecting qualities onto it, which includes any values we place on things.

We must stop acting out our plans, and begin to act spontaneously. According to Lao Tzu, humans are the only creatures that do not simply act and react to situations in accordance with their instincts. When we plan, we are striving to be something other than exactly what we are in the present moment. To be acting in accordance with the Tao, we must abandon our judgments of how we should act and simply be in a state of spontaneous, impulsive action. This is referred to as wu wei, which can be translated as “non-acting” or “non-striving,” essentially it is to go with the flow of the Tao. Wu wei is ultimately what Taoism would have its followers achieve.

We are held back from spontaneous action and abandoning beliefs by our selfishness. Our desire to have the things or experiences we see as valuable, nice, enjoyable, etc. keeps us tethered to the world of value judgments and forces us to act in goal oriented ways that are not spontaneous. When we are practicing wu wei, we are simply experiencing as an extension of the universe as a whole, not a self that acts out its will.

According to Lao Tzu, if a person makes these changes and lives according to the spontaneity of wu wei, they will become an extremely powerful sage. They will rise above the dangers we fear, such as poverty, strife, weakness, and early death, because these ideas will have been abandoned with the rest of their value judgments. These states will be cease to be worse than their counterparts, because the person will have thrown out the idea of experiences being good or bad, they will just be.

As a sage, a person who has allowed Tao to steer them will naturally draw people to them. The sage’s presence will draw people who seek their protection and to emulate them. As this spreads and the sage’s influence grows, they will become a ruler who will eventually begin to do away with institutions and rules that come between people and the Tao. Eventually, humanity will be returned to a state of wu wei and will be ruled by the Tao.

Lao Tzu, whether a real person or a moniker for a group of poets and thinkers, had a radical solution to the chaos of their time. The ideas Lao Tzu put forth were highly influential. Beyond the 173 Million people affiliated with Taoist practice in China in 2010, and many others abroad, elements of the paradigm shift encouraged by Lao Tzu is often adopted by “new age” philosophers, leaders and gurus.

[*] Tao Te Ching translated by Gia-Fu Feng and Jane English: This is a solid translation that has been something of a standard for over 30 years.

[*] Tao Te Ching translated by Ursula K. LeGuin: A translation that is optimized for modern English readers, a good introductory translation for those who want to get acquainted with the text.

[*] Tao Te Ching translated by Red Pine: A translation that redners the poeticism and spirituality of the text well.

[*] Dao Deo Jing translated by Robert Eno: Available free online, this translation has a solid introduction that gives a sense of the central themes as well as some information about the enigmatic Lao Tzu.

Ideas to Engage With:

[*] For Lao Tzu, knowledge and wisdom were at odds with one another. This is a concept echoed by many philosophers. Can you think of 10 things you think you know that you could un-know (lose confidence in your beliefs about them) right now?

[*] True spontaneity of action is key to enacting wu wei. Try at least monitoring, if not enacting, your spontaneous actions for a while. What would you be like?

“Those who know do not speak; those who speak do not know.” Dao De Jing Chapter 56

Next time you are having a conversation, try adopting this mindset. See how it changes the way you experience things.

One who knows other people is wise.

One who knows himself is enlightened.

To overcome others is strong.

To overcome oneself is the will of power.

“In pursuing knowledge, one learns with intellect and desires.  Therefore one’s knowledge is accumulated day after day. In pursuing Tao, one is enlightened with the true nature and thus diminishes daily one’s worldly desires and knowledge.” Tao Te Ching Chapter 48