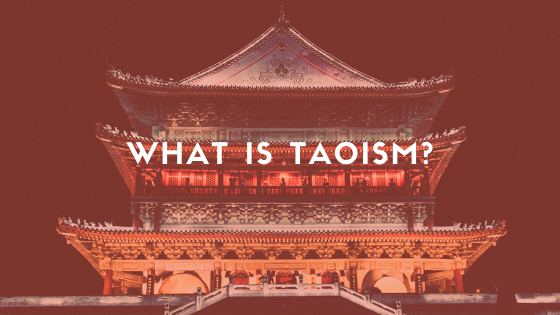 Taosim (Daoism), is a Chinese philosophy dating back to the 4th or 6th century BCE. The central idea of Taoism is that the Tao (or “the way”) is an organizing force that guides nature and the universe, and humans can achieve transcendence from suffering by aligning themselves with it. The way to align with the Tao is to engage in wu-wei, “non-action,” which is to act out of a place of complete spontaneity.  In 142, Zhang Daoling founded the Tianshi (Celestial Masters’) school, the first religious institution based on Taoist philosophy and religious Taoism exists to this day.

The central doctrines of Taoism come mainly from two seminal texts, the Tao Te Ching and the Zhuangzi.

The Tao Te Ching, Written by Lao Tzu in the 4th or 6th century BCE, the Tao Te Ching is made up of eighty-one short chapters, a mixture of poetry and prose aimed at giving how human beings should best approach becoming more tuned into the Tao. The fundamental teaching of Taoism is that it is only by abandoning our need to understand and control that we can begin to feel and act in accordance with the Tao. Some of the ways of achieving this are the following:

We must abandon our beliefs that come from words. Language limits the scope of understanding of our experiences.  In order to achieve wisdom we must experience life as it is, without filtering it through our preconceived ideas and concepts. Along with this comes abandoning all of our value judgments. We superimpose ideas of good or bad, right or wrong, enjoyable or detestable onto the universe, but these are not characteristics of the things we see them in. Our value judgments also carry with them desires, which in turn cause us plan and seek to satiate these desires. This is the opposite of acting spontaneously, and therefore draws us away from the Tao.

We must stop acting out our plans, and begin to act spontaneously. According to the Tao Te Ching, humans are the only creatures that do not simply act and react to situations in accordance with their instincts. When we plan, we are striving to be something other than exactly what we are in the present moment. To be acting in accordance with the Tao, we must abandon our judgments of how we should act and simply be in a state of spontaneous, impulsive action. This is referred to as wu wei, which is to act without acting. This is a mentally passive process where we allow the action to flow from us naturally. Wu wei is ultimately what Taoism would have its followers achieve.

We are held back from spontaneous action and abandoning beliefs by our selfishness. Our desire to have the things or experiences we see as valuable, nice, enjoyable, etc. keeps us tethered to the world of value judgments and forces us to act in goal oriented ways that are not spontaneous. When we are practicing wu wei, we are simply experiencing as an extension of the universe as a whole, not a self that acts out its will.

If a person makes these changes and lives according to the spontaneity of wu wei, they will become an extremely powerful sage. They will rise above the dangers we fear, such as poverty, strife, weakness, and early death, because these ideas will have been abandoned with the rest of their value judgments. These states will be cease to be worse than their counterparts, because the person will have thrown out the idea of experiences being good or bad, they will just be.

The Zhuangzi we know today was rendered from a fifty-two chapter version down to thirty three by Guo Xiang in the 2nd century CE. The thirty three chapters are then sub-categorized into the Inner Chapters (thought to be the original writings of Zhuangzi (368-298 BCE)), the Outer Chapters and the Miscellaneous Chapters.

The Zhuangzi certainly has thematic ties to the Tao Te Ching, but provides more concrete practices to become one with the Tao. It explains concepts and practices often through parables, usually a discussion between two characters (historical figures and animals alike). In the book, the ways of achieving some level of wu wei are tied to allegories containing actions that a person can engage with. Here are a few of those:

In Chapter one of the Zhuangzhi, it is explained that when we are able to shed the responsibilities and familiarity of daily life and wander freely, we can achieve a state wu wei. By leaving a context that we are accustomed to and exploring an unfamiliar world, it will become easier for us to be experiencing without preconceived ideas and words. Wandering in a natural setting where we can observe the way nature exists and try to imitate it. Overall, we must withdraw from society and go to nature to find the Tao.

It is possible, through perfection of craft, to achieve a state of wu wei. Ding the Butcher, who after years of practice, has become so adept at butchering ox he has begun to butcher by “spirit” not by eye. The idea of mastery and wu wei is what we might today call a “flow state.” Once an action has become so second nature that it flows from us without being thought about beforehand, when we engage with that action, we are in a state of “non-action.”

The Zhuangzi suggests that in addition to the kind of knowledge we obtain from words, discussion, and concepts, there is a knowledge that is internal and non-conceptual that we must recognize and nurture. This other mode of knowing is what gives us our ability to do all of our unthinking behaviors (breathing, moving, etc,), but also provides the sense of understanding of many complex things like space and time. It is this mode of knowing that allows us to exist and to understand our existence (though not in a way that can be verbalized), but we place much more emphasis on developing conceptual knowledge.

“To the most trivial actions, attach the devotion and mindfulness of a hundred monks. To matters of life and death, attach a sense of humor.” — Zhuangzi

[*] Try wandering. Go somewhere you haven’t been before, go alone, leave your phone, explore. Try to allow your experience to be direct and in the moment. Don’t think, try to absorb what is around you. See if you can feel what the Taoists refer to as wu wei.

[*] Breath. Focus on your breathing. Try to think of nothing else. Your breath happens on its own and is a part of what Zhuangzi thought of as the natural mode of knowing. Try to observe this natural process within you. How does your breath connect you to the world around you?

[*] Move. Find somewhere with space. See if you can adopt the spontaneity of wu wei. Try moving, but once you’ve spurred the action, see if you can move without trying. See what flows from you if you allow yourself to move with complete spontaneity.