Who Is Immanuel Kant? 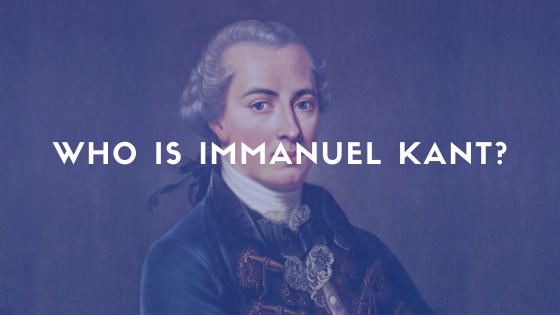 “All the interests of my reason, speculative as well as practical, combine in the three following questions: 1. What can I know? 2. What ought I to do? 3. What may I hope?” – Immanuel Kant

Immanuel Kant (1724-1804) was a German, Enlightenment philosopher most famous for his theories of morality and epistemology (the study of knowledge). Born to deeply religious parents, Kant lived out the entirety of his life in Königsberg (now part of Russia and named Kaliningrad). Never marrying, Kant dedicated his life to the study, teaching, and writing of philosophy. Kant lived a very routine-oriented life, waking at  5 A.M. to meditate, smoke, and drink tea for an hour, then spending an hour preparing lectures that he would deliver at his home from 7 A.M. until 9 A.M. He would then write until 1 P.M. after which he’d eat and socialize for three hours, walk for another hour, then read and write until he went to bed.

“Have courage to use your own understanding!’ – that is the motto of enlightenment.” — Immanuel Kant, What is Enlightenment (1784)

Kant saw the “age of enlightenment” as defined by the beginning of a widespread turn to reason and discussion, as well as a secularization of thought and society at large. In his mind, this carried with it a new-found freedom, a “maturity” of thought that did not rely on “guidance from another” for understanding. On the other hand, he also felt that there was a risk of a certain amount of chaos with the weakening of religious authority. Religion had been the source of morality and truth, and Kant felt a responsibility to find ways to establish a necessary foundation for morality and our idea of truth.

In the Critique of Pure Reason (1781), Kant set out to do the latter. The Critique is a work of epistemology (theory of knowledge) and metaphysics (the study of what is), that argues against both the rationalist’s claim that truth only comes from reason, and the empiricist’s claim that truth only comes from experience. Kant argues that, in fact, our understanding comes from both experience and reason.

Now, things get REALLY complicated in the Critique, but basically, what Kant wants to say at the end of the day is that we can know things about the world around us. The fact that the world around us may be in our own heads is okay, because we share a number of basic principles that allow us to share an understanding of the world that we all experience. To get to this point, we have to figure out what knowledge we can even have. Kant holds that our experiences cannot be understood without our innate understanding of space, time, and existence (how do you understand any visual input without already having a sense of things existing in space), but also that those innate understandings are meaningless without our experiences (how would time mean anything to you without experiencing multiple things happening in succession).

Furthermore, though our perceptions may be flawed and our innate understandings may be somewhat limited, the combination of these can lead us to some universal truths that form some laws of our experiences. Instead of being limited to our innate understanding of truths like “all bachelors are unmarried men” (tautological or a priori truths), which are universally and necessarily true, but don’t provide any expansion of knowledge, by combining our innate understanding of things like space and time with concepts we develop from observation, we can arrive at necessary and universal truths about our perceptual world. These are what he calls synthetic a priori propositions, meaning judgments that relate more than one thing in a way that is necessary and universal.

If you’re lost, don’t worry. Kant really just wants you to know that we can have laws of nature, and that we can do science and learn about our world, because even if our perceptions are flawed, there is a relationship between them and the innate, universal concepts like existence, time, and space. Basically, you can know that a baseball is going to move if you hit it, because you know there is space and your perceptions about space have allowed you to form a more complete idea of space, which in turn has allowed you to infer certain laws about how space and objects function together.  Whether we can say that the law of kinetic energy is a facet of an underlying reality that exists independently of us doesn’t matter. Kant’s “Copernican revolution” is that we need to throw that out and focus on knowing about the world as it exists for us.

In Kant’s Groundwork of the Metaphysics of Morals, another of his most influential works, he sets out to establish a moral theory that didn’t rely on a moral authority (like God). The most important idea in this work is the “Categorical Imperative,” an attempt to establish a moral law that applies universally and necessarily, meaning it needs to provide a course of action in any situation and cannot rely at all what the outcome of that action is. What Kant arrives at is the following:

“I ought never to act except in such a way that I could also will that my maxim should become a universal law.” — Groundwork of the Metaphysics of Morals (1785)

The Critique of Judgment was Kant’s third critique, in which he dealt with both aesthetic judgment (the judgment of beauty, the sublime, the agreeable and the good) and teleological judgment (judgment of intrinsic or built-in purpose). His examination of aesthetic judgment is important, because it was one of the first attempts by a philosopher to tackle a comprehensive analysis of aesthetics. In the Critique of Judgment, Kant determines that judgments of beauty and the sublime are subjective, because what is of importance is not the actual thing being judged, but rather the feeling being elicited. He also argued that  these judgments are universal in that they go beyond just what the effects the thing has on us, but take into account the purpose of the thing and if it achieves it.

Overall, Kant was an incredibly prolific and influential philosopher who came up with more revolutionary philosophical ideas in more areas of philosophy than any other philosopher of his time. He completely changed the way philosophy was done and did so by tackling huge ideas in unique and ambitious ways. Then he died.

This book is a real beast. It’s serious philosophy, written by a German in the 1700s. It’s next to impossible to understand without a pretty good grasp on metaphysics and philosophical lingo, but if you want to challenge your chops, it’s worth a go.

If reading the Critique on your own doesn’t seem appealing (why would it), but you want to understand, this book will help you get to what Kant is saying without having to decipher it yourself.

Groundwork of the Metaphysics of Morals (1785)

Much more digestible than the Critique of Pure Reason, this is an interesting read for those who want to understand more about moral philosophy. The Categorical Imperative Kant lays out has definitely been debated extensively and more or less put to rest, but it is fascinating to think about how to actually create and make necessary any kind of morality.

Another highly influential work where Kant takes on our judgments of beauty, the sublime, and teleology.

Ideas to Engage With:

[*] Kant’s categorical imperative claims  “I ought never to act except in such a way that I could also will that my maxim should become a universal law.” Does this seem like a reasonable moral law? Can you think of examples where this doesn’t make sense?

[*] Kant claims that there are synthetic a priori truths, truths that are universal and necessary, but also relate more than one thing to each other. An example would be 5+8=13. Can you think of other examples of this kind of truth that doesn’t involve numbers?

“All our knowledge begins with the senses, proceeds then to the understanding, and ends with reason. There is nothing higher than reason.”

“For peace to reign on Earth, humans must evolve into new beings who have learned to see the whole first.