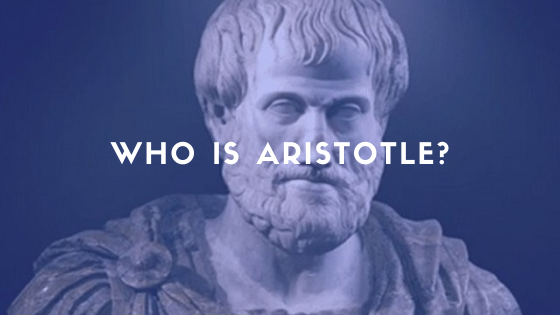 Aristotle was so influential that Thomas Aquinas called him simply “The Philosopher.” The third in a trilogy of great Greek philosophers (after Socrates and Plato), Aristotle branched out into fields neglected by his predecessors. He is considered the father of modern logic, and his work lays the foundation for the modern scientific method. Aristotle changed the way we think about reality by bringing philosophy down to earth– showing us how to understand the world by observing it.

Aristotle was born in 384 BCE in Stagira, along the Thracian coast of Greece. When he was 17 years old, he moved to Athens and enrolled in Plato’s Academy. Aristotle quickly became  the Academy’s star student, despite disagreeing with Plato on many philosophical principles. When Plato died in 347 BCE, Aristotle left Athens and went to live in Mysia, where he married and had a son. Aristotle’s next job offer came from the royal court of Macedonia. He taught a 13 year old boy who would later conquer the world, the young Alexander the Great. When his tutee ascended the throne, he went back to Athens, and found the Academy thriving. Platonic philosophy had taken a firm hold in Greek culture and Aristotle founded his own school, the Lyceum.

This Renaissance fresco by Raphael, “The School of Athens,” helps us to understand why Aristotle’s ontology (theory of being) was so radical in a world dominated by Platonic thought.

According to Plato’s philosophy, what we perceive as reality is just an imperfect expression of immaterial “forms.” Truth exists only beyond the material world. To understand what a “good” thing is, you have to understand the concept of “goodness,” and accept that nothing that exists on Earth will ever quite get there.

Aristotle’s philosophy takes our focus to the other end of the spectrum. In Aristotle’s view, the material world is king. The ultimate expression of reality is found in the world around us,  in particular people, animals, and things, which he calls “primary substances.” Any other categories we might create (“good” or “man”) are really just there to help us talk about those individual people or things. So Raphael shows Plato, on the left, pointing up to sky, gesturing towards a transcendent ideal,  while his student is pointing down to the ground, directing our attention to the material world.

When you are trying to answer a question, do you start by thinking and then try to figure out how your answer fits into the world? Or do you start by observing, collecting information, and then build categories and concepts around the insights you’ve gained? Aristotle viewed the latter approach as the way to achieve knowledge.

The facts have not yet been sufficiently established. If ever they are, then credit must be given to observation rather than to theories, and to theories only if what they affirm agrees with observed facts.

In addition to his focus on observation, Aristotle laid out clearly for the first time in Western Philosophy formal logic. Breaking arguments down into symbolic form, he coined a style of logic that defined logic until it was replaced by mathematical logic in the 19th century. Effectively, the claims must be able to be broken down into simple terms that state the relationships of ideas (e.g. If A then P, A, therefore P). Breaking down arguments into symbolic form makes it much harder for flowery language or compelling anecdotes to help hide illogical arguments and conclusions.

In Athens, Aristotle started to gain his own following. Studying at the Lyceum was different from Plato’s Academy. Aristotle was interested in practical wisdom, in understanding how things work and how to do them better, which for him included understanding how to be a better person, how to be happy, and how to build a better society. He made his students observe nature, collect information, and even talk to hunters and fishermen to ask them about their experiences. Aristotle liked to walk around a lot while he was lecturing, so his followers became known as Peripatetics, which means “to walk about.”

With the fall of Alexander the Great in 323, BCE, the political tides shifted. Because of his ties to Macedonia, Aristotle was forced to flee Athens to protect himself. He died a year later.

The prolific writer is credited with over 200 treatises, only 31 of which survive.

In the ancient world Aristotle was known as an artful prose stylist (an inspiration to Roman orator Cicero), but the handful of works that have made it to modern times are mostly lecture notes. They weren’t mean to be read, so they are sometimes hard to follow. Proceed with patience; it’s worth the effort, but it takes some time to unpack.

The title comes from Nicomachus, Aristotle’s son, who first edited the volume.

Here, Aristotle tries to help us figure out what we should be doing with our lives. Our ultimate goal, he say, is finding eudaimonia (in English we would call it something like happiness or fulfillment), and we should structure our lives so that our daily activities will eventually take us there.  Aristotle tells us to think beyond our obsession with defining the difference between a good act and a bad one. Doing a random good thing doesn’t make you a good person. Becoming a good person is a long process that requires us to work towards becoming virtuous.

As far as its name goes, most people virtually agree [about what the good is], since both the many and the cultivated call it happiness, and suppose that living well and doing well are the same as being happy. But they disagree about what happiness is, and the many do not give the same answer as the wise.

Aristotle’s Poetics tries to understand Greek tragedy. Why would anyone spend your free time watching terrible things happen to fictional characters? Aristotle identified the function of katharsis. He used the word in sense pretty close to the modern meaning of catharsis: It’s a kind of release. Watching scary things happen on a stage allows us to cleanse ourselves of the fear we are carrying around.

Tragedy, then, is an imitation of an action that is serious, complete, and of a certain magnitude… in the form of action, not of narrative; through pity and fear effecting the proper purgation [catharsis] of these emotions.. . . .

Three Ways to Apply Aristotle to Your Life:

Convince people to take your side.

Aristotle understood that popular opinion doesn’t always side with the most logical argument. While other philosophers were judgmental of the poor reasoning of their fellow citizens, Aristotle acknowledged that people with good ideas need to make the effort to meet their listeners halfway.

In his book Rhetoric, Aristotle outlines some strategies and principles for how to sway opinion.

His “rhetorical triangle” shows us that we need to appeal to listeners not only on a logical level. Listeners need to be able to trust the speaker, to find him credible and trustworthy, and to feel the appeal of the argument on an emotional level. The three magic words to keep in mind are: ethos, pathos, logos.

There are, then, these three means of effecting persuasion. The man who is to be in command of them must, it is clear, be able (1) to reason logically, (2) to understand human character and goodness in their various forms, and (3) to understand the emotions-that is, to name them and describe them, to know their causes and the way in which they are excited.

Be a true friend.

Aristotle thought that our friends have the power to help us become better people. A true friendship (different from friendships based on having fun, or friendships based on mutual benefits) is with a person who we value for their virtues.  True friends can act as a kind of mirror for each other. When we can truly care for another person, we can be inspired to lead better lives.

In poverty and other misfortunes of life, true friends are a sure refuge. The young they keep out of mischief; to the old they are a comfort and aid in their weakness, and those in the prime of life they incite to noble deeds.

Being virtuous is about finding a balance, existing in the Golden Mean. When Aristotle considered different virtues, he realized that good behaviors often fell between two extremes. If you have too little fear, you are guilty of the vice of rashness, if you have too much fear, you suffer from cowardice. Growing as a person is about learning to find that midway point, and respond appropriately to the situations that life throws at you.

“Excellence is never an accident. It is always the result of high intention, sincere effort, and intelligent execution; it represents the wise choice of many alternatives – choice, not chance, determines your destiny.”

“He is happy who lives in accordance with complete virtue and is sufficiently equipped with external goods, not for some chance period but throughout a complete life.”

“Happiness, therefore, does not lie in amusement; it would, indeed, be strange if the end were amusement, and one were to take trouble and suffer hardship all one’s life in order to amuse oneself.”