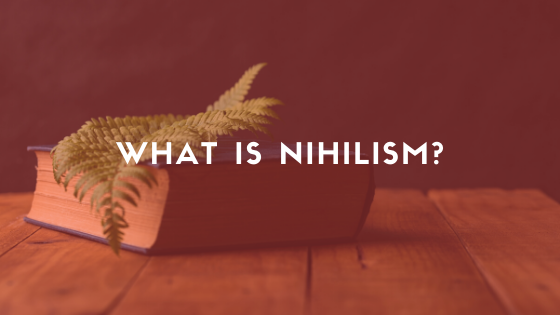 While you may have heard the word nihilism before, there are common misconceptions as to what it means. It’s popularly described as the belief that “nothing matters,” but it is more accurately described as the denial or lack of belief in the meaning of life. More specifically, nihilism encourage skepticism and argues that life lacks inherent meaning or purpose. From this, it often follows that there are no inherent moral values and that much of life’s meaningfulness is entirely subjective. It sounds simple enough, but nihilism is an extremely diverse philosophy with many schools of thought.

Existential nihilism is the form of nihilism most of us are familiar with. In short, it’s the belief that there is no intrinsic meaning to life. As a result, our lives are insignificant and don’t serve a purpose. Existentialism offers a variety of responses to this view.

Moral nihilism, also known as ethical nihilism, refers to the viewpoint that morals are not inherent in society. Specifically, all decisions—whether typically considered good or bad—are equal. Most often, morality is understood to be an entirely human construction with no genuine basis in our reality.

Compositional nihilism is somewhat more complicated. It is the belief that the complex objects do not exist. While the building blocks of the world, such as atoms, exist, the larger objects we perceive are entirely subjective. Thus, a table does not actually exist. If we could see the world more clearly, we would only see a collection of atoms (or some other building block). What is particularly interesting about this form of nihilism is its subjectivity. While we perceive the smallest aspects of life to be neutrons and electrons within atoms, smaller building blocks could still exist. This leads us to question if anything we know is real at all.

The earliest known reference to the school of thought we now know as nihilism occurred between 563 and 483 B.C.E. Buddhist writings from the period describe the views of various groups of thinkers, some of whom were moral nihilists. These texts defined moral nihilism as the belief that our actions have no results, that there is no reincarnation following death, and that there is know way to be certain of anything.

Shortly after, Greek philosophers, such as Gorgias, began to explore metaphysical nihilism. They questioned the existence of the physical world around us and if we can truly know that anything exists. This easily developed into more theoretical applications of the philosophy, such as if morality exists.

However, the term nihilism was not coined until the 18th century. Friedrich Heinrich Jacobi used it to criticize Immanuel Kant and other rational philosophers. He believed that all rationalism leads to nihilism, meaning that a turn to faith would be more appropriate for the field.

Nihilism began to grow in prominence through the writings of Søren Kierkegaard. He developed a concept known as leveling, which Kierkegaard called the process of eliminating individuality such that the individual’s life would become meaningless. He advocated against this and its impacts, adamantly opposing the standardization of life. Specifically, some forms of Christianity were believed to encourage the abandonment of individuality, depriving people of becoming their true selves. It is important to note, however, that Kierkegaard’s definition implies life had meaning to begin with. Modern-day nihilism claims that meaning was always lacking.

The philosopher most credited with solidifying nihilism’s importance in the field, however, is Friedrich Nietzsche. A 19th-century German philosopher, he identified nihilism as a common phenomenon in Western culture and developed detailed theories on its function. Nietzsche believed that nihilism was on the rise in the Western world, and that this was a direct response to modernism. He saw this rise in nihilism as emptying the world of all meaning and truth. His most meaningful contribution was associated nihilism with moral values.

As the 20th century progressed, writing on nihilism became more and more frequent. Martin Heidegger analyzed the work of Nietzsche and published many of his unpublished manuscripts. World War II and the Holocaust served as a back drop for this project, and encouraged many others to further consider nihilism as a philosophy. For instance, Albert Camus considered the atrocities of the Holocaust in his book The Rebel, arguing that nihilism allowed for endless murder.

As noted above, Kierkergaard developed an early concept of nihilism he referred to as leveling. The Present Age details this theory and offers great warnings against nihilism. It offers great insight into the philosophical context of his time.

This list would naturally be incomplete without Nietzsche. We highly recommend Thus Spoke Zarathustra, published in 1892. It is one of his more famous works and highlights his popular ideas such as the death of God and Übermensch theory. No philosophical library is complete without it.

Martin Heidegger offers unique commentary on nihilism in the twentieth century. Published in the 1940s, Determined by the History of Being is Heidegger’s attempt to understand Nietzsche’s thinking and expand upon it. The Movement of Nihilism is also a great collection of essays

It’s also interesting to consider nihilism’s impact on broader culture. A particularly noteworthy intersection of nihilism and art is the dada movement in the early 20th century. Discouraged by both the First World War and modernism, many artists created what they referred to as anti-art. They believed that through war and modernization, art had been devalued. Art of this period is nonsensical, irrational, and often nihilistic.

Embrace Meaningless as a Motivator

When people learn about nihilism, they often ask what the point of life is without meaning. Why do anything if none of it matters in the end? However, you shouldn’t look at things that way! If nothing matters, you’re free to do what makes you most happy. For instance, while your family may pressure to pursue one career, you can rest assured that there is no consequence in the grand scheme if you choose to do what you enjoy instead. There is power in freeing yourself from expectation.

A Lack of Meaning Isn’t a Lack of Structure

It may seem that nihilism naturally leads to anarchy. After all, if there are no morals, people can do whatever they want without caring if they hurt others. However, believing that there is no inherent meaning or value in life doesn’t mean you’re forbidden from weighing your options. When you free yourself from the concern over what is inherently right or wrong, you’re open to question your decisions and consider your actions in a more critical light.

Allow Yourself to Fall Down the Rabbit Hole

It’s no surprise that too much nihilism can lead to feelings of depression and isolation. If we spend a lot of time dwelling on how pointless our lives are, it’s not unusual to begin disliking them. Despite this, allowing yourself to healthily (and briefly) fall into the pit of despair that nihilism may appear to be is a good thing. It can help you set perspective and manage stress. Is working that extra ten hours every week to impress your boss worth it if it’s all pointless? Should you drive yourself crazy over a competition? The likely answers are no, and nihilism can help you eliminate these small stressors from life.

“God is dead. God remains dead. And we have killed him. Yet his shadow still looms. How shall we comfort ourselves, the murderers of all murderers? What was holiest and mightiest of all that the world has yet owned has bled to death under our knives; who will wipe this blow off us? What water is there for us to clean ourselves?” – Friedrich Nietzsche

This is by far one of the most famous quotes regarding nihilism ever written. This refers to the Enlightenment, or the period of European history in which rationalism developed a stronghold in philosophical thought. In depending on rationalism, we avoid the possibility of believing in a God (and thus the inherent meaning of life).

“Life’s but a walking shadow, a poor player, that struggles and frets his hour upon the stage, and then is heard no more; it is a tale told by an idiot, full of sound and fury, signifying nothing.” – William Shakespeare

While many of us think of nihilism as a complex philosophical theory, it’s important to remember that nearly all of us have found life meaningless at one point or another. This quote by Shakespeare is the perfect example of that. However, it’s important to remember that nihilism is not inherently pessimistic. Realizing that life has no meaning does not require living a boring or sad existence.

“The modern mind is in complete disarray. Knowledge has stretched itself to the point where neither the world nor our intelligence can find any foot-hold. It is a face that we are suffering from nihilism.” -Albert Camus

Many nihilists believe that nihilism is a direct response to modernity. In a world where our revolve around menial labor and consumption, we naturally begin to view our own efforts as futile. In some ways, we know too much for our own good and have too much at our disposal.

“Science keeps religion from sinking into the valley of crippling irrationalism and paralyzing obscurantism. Religion prevents science from falling into the marsh of obsolete materialism and moral nihilism.” -Martin Luther King Jr.

While many would argue that morals can exist without religion, Martin Luther King Jr. points out a key tension in nihilism. Namely, there is a tension between the human desire to create meaning in the world and the apparent lack of meaning proposed by rationality. How we reconcile the two is the subject of debate.

Gorgias is an ancient Greek philosopher who developed early theories of metaphysical nihilism. In other words, he questioned the inherent truth of anything we know about the world around us. This is just proof that humans have always been fascinated with what we can know with certainty and what that means for our lives.