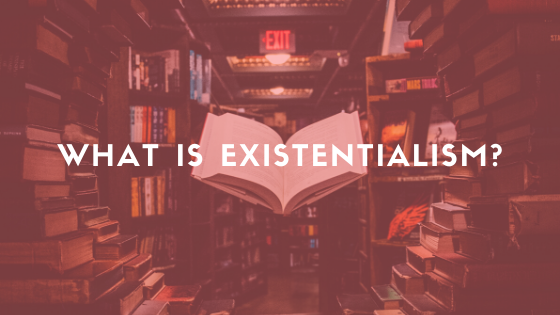 Existentialism is, broadly speaking, the inquiry into the nature of human existence, what it is to be human, and what it means to be human. What draws the thinkers and writers we refer to as existentialists together is their rejection the attempt to approach these subjects from an objective, metaphysical standpoint, seeking to define what human existence means universally. The existentialists begin their inquiry from the subjective, from what being a human feels like to the individual, and many seek to give practical advice for how to improve the quality of human existence.

The central problem that existentialists all deal with in one way or another is the apparent lack of objective meaning and purpose to life. They reject the idea that there is some kind of one-size-fits-all purpose to existence that is independent from the individual. Human life has no inherent, overarching meaning that we can tap into, religions and public opinion be damned.

So, human existence is devoid of baked-in meaning. This is where the idea of an “existential crisis” or “existential anguish” come from. Basically, we get ejected from the womb into a world that does not tell us how to be human, or what the hell being human even means. The reason for this is that there isn’t one way to be human and there are no universal rules for a person to latch onto.

It is this that creates the absurdity of human existence. The human desire for meaning and rules that can be understood paired with the apparent lack of either of those things in the world we inhabit is the source of endless absurdity. We want nature, or the universe, or something to care about and guide us, but it doesn’t, we are instead faced with random events that work counter to what we think should happen all the time.

Recognizing this, however, is the first step, rather than the final destination of existentialism. Existential thinkers take as self-evident this lack of universal purpose to human existence, what they propose as the answer is that meaning must come from the individual. Jean-Paul Sartre said, “existence precedes essence.” What he means by this is that humans start by existing, and it is only by existing and making choices that they develop a purpose. Unlike with a hammer, which you can say is for hitting things and carried that essence into existence with it, the existentialists hold that because we are capable of self-interpretation, humans are active participants in defining our purpose.

Instead of fearing and anguishing in this lack of purpose, we should see it as freedom to choose who we are and what life means to us. Through our choices, we create ourselves and what being a human means to us. This, however, is a lot of responsibility, so further angst and dread can come from this heavy duty placed upon us. In addition, this facticity (our identity being bound to our past and the physical realities of our being) places limits on our freedom. We can’t simply ignore the past and be whoever we want, who we were defines who we are, if we ignore that we are being inauthentic.

Authenticity is a theme in many existentialist writings. Authenticity is acting as oneself, or acting in accordance with both freedom and facticity. This means they understand that they are ultimately responsible for their action and its outcome (there is no guiding moral authority or determined outcome), but also that they are themselves and understand how that affects their actions.

Kierkegaard was a Danish philosopher and theologian, considered to be the father of existentialism. He was a religious existentialist, reacting against dominant philosophies and the Danish church. Kierkegaard was critical of thinkers like Hegel who believed that we can rationalize everything, including religion. By contrast, he argued that religion and faith in God requires a suspension of reason and a “leap of faith.”

Dostoyevsky was a Russian writer, known for his exploration of the human condition. His most famous existentialist novel is Notes from Underground. This novel portrays the life of man in constant struggle to find meaning, to define himself, and his world around him. The underground man lacks a sense of self and resists defining himself. He is filled with fear, anxiety, and resentment. The underground man is not every human, but he is an example of how most people react to the problem of the contrast between our hopes, dreams, loves and the reality that does not conform to them.

Nietzsche was a German philosopher and philologist. He argued that the crisis of meaning is tied to the crisis of religion, especially Christianity. For him, Christianity leads to a herd mentality, which perpetuates a life-denying philosophy that constantly requires sacrifice. The individual must free oneself from conventional morality, but not in a way that leads to nihilism. The free individual must assert their power and create new values that are life affirming. Nietzche called this free individual the overman or beyond-man [Übermensch].

Sartre was one of the few people in this list who adopted the moniker “existentialist,” a categorization many chafed against. He defined existentialism as the idea that human beings are agents who freely shape themselves through their thoughts and actions. For him, subjectivity is the first principle of existentialism. He argued that we live in a meaningless world and create meaning by the choices we make in the world.

De Beauvoir was a French philosopher famous for her existentialist and feminist work. Her work focused on freedom, ambiguity and responsibility. She believed in the freedom to make choices, but argued that there is nothing telling us in advance what the right choice is. De Beauvoir’s most revolutionary idea was that one is not born a woman but becomes a woman. What does this mean? For Beauvoir even though there are biological characteristics that set women apart from men, these biological differences do not determine women. Biological differences do not determine the social role of women. They do not determine social, political, and intellectual capacities. Women, for her, should not be reduced to their biological constitution nor should their biological constitution limit their future possibilities. Her belief in authenticity led her to advocate for women’s freedom and right to choose their own lives.

Camus was a French philosopher most concerned with the absurd. He argued that human beings cannot avoid asking themselves about the meaning of existence. In fact, the meaning of life is the most urgent question. And yet, there is no answer to it. Though existence has no meaning, Camus argued that we must face this emptiness. The paradox of the drive to ask questions about meaning and the fact that we cannot answer these questions is the absurd.

Jean-Paul Sartre: Existentialism is a Humanism

Existentialism is a Humanism was published 1946, based on a lecture Sartre gave at Club Maintenant, Paris. In this text, Sartre makes his most famous contribution to existentialism—his claim that “existence precedes essence.” That is, human beings first exist then have an essence.

Friedrich Nietzsche: On the Genealogy of Morality

In On the Genealogy of Morality, Nietzsche examines the relationship between our value systems and power. He argues that morality is often created by the powerful to control the weak, and that what is built in to this kind of morality is a moralizing of power itself.

Camus’ Myth of Sisyphus reflects on the Greek myth of Sisyphus who pushes a boulder up a hill day after day and takes up the question of suicide. He begins by claiming that the truly serious philosophical question is the question of suicide. We seek to find meaning in a meaningless world. When we confront the absurd, having understood that life is meaningless, should we commit suicide? Should moments of desperation lead to suicide? To answer this question Camus turns to Sisyphus. He argues that the moment which interests him is the moment of the return of the boulder, or what he calls “the hour of consciousness.” In that moment, Sisyphus, for Camus, is stronger than his rock and superior to his fate.

Fear and Trembling is Kierkegaard’s most famous existentialist work, which takes up the story of Abraham and Isaac. God asks Abraham to sacrifice his son, Isaac, as a sign of his faith. Abraham obeys God’s command, but in the last moment God intervenes and saves Isaac. Kierkegaard takes up this question to ask what is the morality of this story? Kierkegaard argued that the sacrifice could only take place because Abraham loved Isaac. It is through this love that Abraham can prove his faith and love for God. Faith, for him, requires passion. Kierkegaard used the phrase “leap of faith” to denote that believers leap not because they do not have proof or evidence; rather, believers take a leap of faith because faith itself cannot be reduced to rationality.

“God is dead. God remains dead. And we have killed him.” — Friedrich Nietzsche, Thus Spoke Zarathustra

“One is not born a woman, but rather becomes, a woman.” — Simone de Beauvoir, The Second Sex

“I rebel; therefore we exist.” — Albert Camus, The Rebel